TELUKKUANTAN – The spread of confirmed cases of COVID-19 in Kuansing which was updated on Friday (13/08/21) reached 23 cases, but the number of recovered COVID-19 patients increased by 41 patients, 1 person died.

Spokesman for the Covid-19 Task Force, Dr Agusmandar, SSos, MSi explained, out of the 23 new cases, 1 person was a 4-year-old boy from Hulu Kuantan District.

According to Agusmandar, 1 person who died was a 53-year-old male from Singingi Hilir District.

He added that until now the suspects have reached 249 people, consisting of 221 people who recovered and 28 people died. Meanwhile, the specimens examined so far have totaled 14,788 samples, with details of 9,206 negative results and 5,582 positive results.

With the increasing number of positive confirmation cases in Kuantan Singingi Regency, it is always appealed to the community to jointly make efforts to prevent and break the chain of transmission of COVID-19 with the 5 M movement, namely:

1. Wear a mask when out of the house and at work.
2. Washing hands with soap
3. Keep a distance (Physical Distancing).
4. Avoiding the Crowds
5. Limiting Mobilization and Interaction 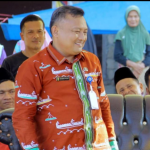 Baca Juga:  7 Ideas for Decorating a Laundry Room in a Small Home so It Doesn't Take Up Space
Comment