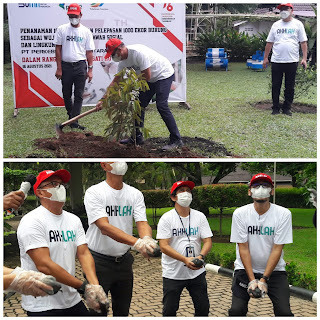 Welcoming the 76th Independence Day of the Republic of Indonesia, PT Perkebunan Nusantara 2 (PTPN 2) Tanjungmorawa carried out the planting of 1,000 trees and the release of 1,000 birds, Monday (16/8/2021) at the directors’ housing complex in Tanjungmorawa, Deliserdang Regency.

“Even if the durian montong is planted, later we will not enjoy the results, but at least there is something good that we leave as our charity,” he said. Furthermore, the release of 1,000 birds is a symbol for being free to innovate the ability to make things better.

In the past, we heard a lot of birds chirping when we woke up in the morning, but now what we hear is the sound of factories and vehicles.

On that occasion, the Director of PTPN2 invited all employees to go back to nature. The moment only aroused a small part with the intention that the same activities be carried out in the environment where all employees live.

“Hopefully, the spirit of the proclamation of August 17, 2021, will now become a milestone for us to race to achieve the glory of PTPN 2 as we all hoped for, so that the company is prosperous and its employees are prosperous,” the Director hoped.

Meanwhile, the Head of the Public Relations Subdivision, Priyo Wicaksono, together with Elvina Suci Kartika, PKBL staff as the committee, said that the 1,000 birds that were released, namely pigeons, turtles, starlings and cucakrowo, were released in the directors’ housing area.

Furthermore, the 1,000 trees planted were durian, trembesi and mahogany, symbolically planted in the directors’ housing complex, then most of them were planted in the garden/Afdeling residential area.

After planting trees and releasing birds, the director of PTPN 2 Irwan Warin-angin gave a certificate of appreciation and payments for the 2021 Jubilee to 1,442 employees in the amount of Rp. 5,947,218,192 with a service period of 20 years, 25 years, 30 years and 35 years, at Puri Triadiguna PTPN2 Tanjungmorawa.